This service is suitable for use at home during the Easter Season while we are still under lockdown because of the COVID-19 pandemic. It has an ‘Easter Sunday’ feel, but can be used at other times as well. It is designed so that you can read the prayers & readings, listen & watch the hymns & messages, without having to worry about saving files or swapping from one application to another. Simply scroll up and down to read, and select the play button (the triangle) to watch the videos.

We may be apart for Easter 2020, but we can still find ways to worship and celebrate the resurrection together. Nearly 400 United Methodists from across the globe  — Africa, Asia, Europe and North America — join their voices to sing together a hymn by Charles Wesley. Please select the link below to see the YouTube video.

God, our maker and our redeemer, you loved the world so much that you sent your only Son to bring us life eternal. Dying he destroyed our death, rising he restored our life.

We give you thanks, great God, for the hope we have in Jesus. We praise you for his presence with us.

Because he lives, we look for eternal life with you, knowing that nothing past, present, or yet to come can separate us from your great love made known in Jesus Christ, our Lord.

God of glory, fill your church with the power that flows from Christ’s resurrection.

May it signal the beginning of a renewed humanity, risen to new life with Christ, who lives and reigns with you and the Holy Spirit, one God, forever and ever. Amen.

Loving God, we confess that at times we do not share in the joy of the resurrection, but are caught in the worries of the world.

We confess that we do not always live in the spirit of new life but can remain discontented, grumbling and anxious.

Forgive us for not sharing in the Good News. Forgive us when we hold back rather than risk the joy and encouragement of new life in Christ.

Call us back to your ways, O God, to seek hope and reconciliation, restoration and peace.

In the name of the Risen Christ, we pray. Amen.

Let us spend a moment in silent reflection…

Christ is risen! The stone is rolled away, the tomb found empty.

Rejoice, people of God! Celebrate the life within you, and Christ’s presence in your midst.

For through his death and resurrection, we are forgiven: Thanks be to God!

For listening: ‘It is well with my soul’

Sung by the Wartburg Choir, at First Plymouth Church.

Then Peter began to speak to them: “I truly understand that God shows no partiality, but in every nation anyone who fears him and does what is right is acceptable to him. You know the message he sent to the people of Israel, preaching peace by Jesus Christ—he is Lord of all. That message spread throughout Judea, beginning in Galilee after the baptism that John announced: how God anointed Jesus of Nazareth with the Holy Spirit and with power; how he went about doing good and healing all who were oppressed by the devil, for God was with him.

We are witnesses to all that he did both in Judea and in Jerusalem. They put him to death by hanging him on a tree; but God raised him on the third day and allowed him to appear, not to all the people but to us who were chosen by God as witnesses, and who ate and drank with him after he rose from the dead. He commanded us to preach to the people and to testify that he is the one ordained by God as judge of the living and the dead. All the prophets testify about him that everyone who believes in him receives forgiveness of sins through his name.”

The Resurrection of Jesus

Early on the first day of the week, while it was still dark, Mary Magdalene came to the tomb and saw that the stone had been removed from the tomb. So she ran and went to Simon Peter and the other disciple, the one whom Jesus loved, and said to them, ‘They have taken the Lord out of the tomb, and we do not know where they have laid him’.

But Mary stood weeping outside the tomb. As she wept, she bent over to look into the tomb; and she saw two angels in white, sitting where the body of Jesus had been lying, one at the head and the other at the feet. They said to her, ‘Woman, why are you weeping?’ She said to them, ‘They have taken away my Lord, and I do not know where they have laid him.’ When she had said this, she turned round and saw Jesus standing there, but she did not know that it was Jesus. Jesus said to her, ‘Woman, why are you weeping? For whom are you looking?’ Supposing him to be the gardener, she said to him, ‘Sir, if you have carried him away, tell me where you have laid him, and I will take him away.’ Jesus said to her, ‘Mary!’ She turned and said to him in Hebrew, ‘Rabbouni!’ (which means Teacher). Jesus said to her, ‘Do not hold on to me, because I have not yet ascended to the Father. But go to my brothers and say to them, “I am ascending to my Father and your Father, to my God and your God.” ’ Mary Magdalene went and announced to the disciples, ‘I have seen the Lord’; and she told them that he had said these things to her.

Message of the day:

An interview with Rev. Dr. Stephen Robinson, Disaster Recovery Chaplain, who talks about how we can assist others in the COVID-19 pandemic.

Prayers of the people & Lord’s prayer:

We finish by saying the Lord’s Prayer together.

Sending out into God’s world

Hymn: ‘Thine be thy glory’

May God, the creator of all life, Jesus Christ, the source of eternal life, and the Holy Spirit, the power in each and every life, bless us, this day and every day. Amen.

An upbeat version of ‘Christ the Lord is risen today’. 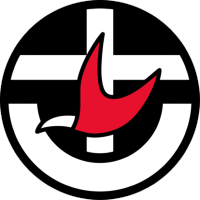